You are here: Home / Backyard Birds and Buds / The Life of a Fiddler Crab 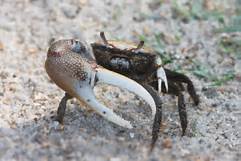 Next time you’re having a particularly rotten day and thinking that life has dealt you a bad hand, consider the fate of a fiddler crab.

Last week while I was surf fishing at Nags Head, I looked down at my feet and saw little flicks of sand coming from a small hole. Intrigued, I continued to observe the spectacle underway. Finally, a tiny fiddler crab emerged from the hole and tossed out another armful of sand.

Fiddler crabs, though there are many subspecies, are fairly easy to identify. One arm (claw) is like a Rambo appendage while the other looks like it belongs to Pee Wee Herman. In other words, they have one huge claw and one not so huge.

Fiddler crabs happen to make very good baits for sheepshead, a fish that love rocks, abutments and piers. A dozen fiddler crabs can set you back $10 or more from a bait shop, but they are terrific fish catchers. But beware! With that one big claw, they can do some serious damage to an errant finger or thumb.

But back to the woes of the fiddler crab. Twice a day, every day, the tide fills up the holes of the unfortunate crustaceans, so it’s back to work, flicking all that wet sand out of their small burrows. About the time things are neat and tidy, here comes the tide and the sand again and it’s back to the hole excavation business.

Fiddler crabs can be found on the beaches, back in marshes and on mud flats. They create small but sometimes elaborate burrows up to two feet deep for mating, sleeping, refuge, and hibernating during winter. The little fellows are very active during the day and return to their burrows at night and during high tide, plugging the entrance with mud or sand. They sift through the sand and feed on bits of algae, bacteria and decaying plants. They are highly prized entrees for sand pipers, those small birds with long legs that scoot along the edges of the surf. When they catch a fiddler, they peck away until it is in edible portions.

By the way, like all crabs, fiddlers shed their shells as they grow. And like blue crabs, if they have lost a leg or a claw, they will grow a new one when they molt. Newly molted crabs are very vulnerable because of their soft shells. They are reclusive and hide until the new shell hardens.

So there you have it. Considering that nobody dumps sand in your front door twice a day, you hardly ever lose an arm or a leg and sandpipers won’t peck you to death, you really have it easy when compared to the trials and tribulations of a fiddler crab.

Keeping the Pests Away

I’ve Got the Butterflies!

I am Jim Brewer, Editor of the new CvilleBuzz, a humble on-line attempt to entertain those, not only … END_OF_DOCUMENT_TOKEN_TO_BE_REPLACED