You are here: Home / Backyard Birds and Buds / The Do’s and Don’ts of Hawk Chasing 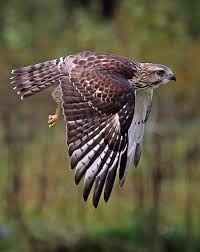 I had just put a handful of mealworms in the bowl near the bluebird house and stood back to watch the male fly to the feeder and secure a beak full of worms. Suddenly, a hawk swooped over the fence, talons stretched, heading for the bluebird. Fortunately, the hawk missed as the bluebird ducked quickly, but these bluebirds are like my children, only better behaved. Startled and extremely upset, I yelled at the top of my lungs, and then took off across the yard in hot pursuit, chasing the hawk from my property.

I was running full-speed, like Usain Bolt at a track meet. I had not sprinted like this since – well, forever. About a dozen strides into my heated chase, I realized I had no exit strategy. With legs wobbling like a newborn colt, I was either going to fall flat on my face and break the few working body parts I have remaining into small pieces, or I would not be able to stop in time and slam into my house with the same result.

As I was stumbling in a near free-fall across the yard, certain I would take an ugly spill, I thought back to physics class and Newton’s First Law, stating that an object will remain at rest unless acted upon by external force, but if that object starts running at full speed, it’s going to be damned hard to stop.

However, with the help of multiple Guardian Angels, somehow I was able to regain my balance and pull up to a safe stop, just before I would have slammed into the house.

I had frightened the hawk, no question, and probably alerted the entire neighborhood that an unstable person was on the loose. As things quieted down, the bluebirds returned to the feeder. They had chicks to feed. Profusely thanking my Angel Entourage, I went safely back in the house.

When you are old enough to remember Richard Nixon’s Checkers Speech, you should not attempt a 100-yard dash under any circumstance. And hawk chasing is out of the question.

I am Jim Brewer, Editor of the new CvilleBuzz, a humble on-line attempt to entertain those, not only … END_OF_DOCUMENT_TOKEN_TO_BE_REPLACED