You are here: Home / Backyard Birds and Buds / The Crow and the Woodpeckers 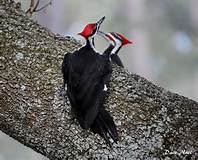 You can see some amazing and some puzzling things in your own backyard. Case in point.

Yesterday I was peering out of my kitchen window, watching the birds at my main feeder, and scarcely 20 feet away I saw a pair of Pileated Woodpeckers. Among my favorite birds, we have had Pileated Woodpeckers nest in the hollow cavity of our 50 year old trees on at least two occasions, and because of our many aging trees, they are frequent visitors in our back yard.

Spectacular birds, the largest of our local woodpeckers have ink-black feathers on most of their bodies with a scarlet red crest accented in pure white.

These two woodpeckers were investigating a hollow place on the white maple just outside our kitchen window. One of the birds, probably the female, was inspecting every nook and cranny, possibly considering a nesting site come spring.

Then I saw a crow fly into that same tree. It was just a single crow, not with his three regular buddies, and he was checking out the woodpeckers. The Pileated’s saw the crow and hid from him, staying exactly on the opposite side of the tree. The birds were about equal in size but it appeared the crow had seniority. Finally, the crow flew to the other side of the tree and proceeded to chase away the two woodpeckers.

I thought this to be very strange behavior. As best I know, woodpeckers won’t bother a crow’s nest, which is usually in a pine tree, nor do woodpeckers attack a crow’s young. The crow would never nest in that hollow place, so I was baffled at the crow’s behavior.

The woodpeckers returned after the crow went away, but I can’t imagine what caused the skirmish. I know crows hate hawks and owls, and will pester them to death, but woodpeckers? Perhaps the crow had stashed some goodies in that hollow cavity? I really don’t have a clue, but if I find out, I’ll let you know.

Smallmouth Bite Is On

I am Jim Brewer, Editor of the new CvilleBuzz, a humble on-line attempt to entertain those, not only … END_OF_DOCUMENT_TOKEN_TO_BE_REPLACED