You are here: Home / Backyard Birds and Buds / That’s a Big Hummer 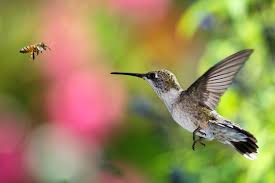 A hummingbird showed up at our feeder a few weeks ago, and it’s the biggest hummer I’ve ever seen. It has an enormous wingspan, maybe five or six inches. Naturally, the hummingbird has staked out our feeder and woe be to any rival that tries to sneak in for a sweet sip of nectar.  Most every hummingbird I have ever seen has been sweet, tiny and delicate. This hummer is a stud. I think he’s been working out,  and that’s a good thing. The little fellow and all his comrades have a long road ahead.

Hummingbirds, as most are aware, live in North America, Central America, South America and the Caribbean Islands. They live in habitats that contain abundant insects, plants with nectar, water and safe places for building nests. These habitats in the Western Hemisphere include suburban backyards, gardens, desert scrublands, canyons, various forests, meadows, grasslands, marshes and tropical jungles.

Hummingbirds migrate north to the southern United States in the spring and go as far as Alaska by May. They migrate south in the fall to Mexico and Central America.

In milder climates, people can begin to feed hummingbirds in the early spring. It is good to begin offering food to birds as soon as they arrive in a particular region so that the birds have a reliable source of nectar upon arrival. People in cooler climates can begin feeding hummingbirds later in the spring. Hummingbirds begin returning to northern areas in May and June, which makes those months ideal for setting out feeders.

On average, the hummingbird flaps its wings up to 80 times per second. This rapid movement creates a slightly humming sound, which is the reason it is called a hummingbird. There are approximately 300 species of hummingbirds, and 12 of these species spend their summers in North America. The average lifespan for a hummingbird is only about three to four years. While most hummingbirds die in their first year, some have been known to survive for up to ten years or more.

Our hummers usually hang around through September, then, just as they appeared, they disappear. It is truly amazing that the small, and some not-so-small, birds that lived in our yard this summer will fly over 2,000 miles to Mexico in the next month. I hope they enjoy their winter and I hope they’ll be back in May.

I am Jim Brewer, Editor of the new CvilleBuzz, a humble on-line attempt to entertain those, not only … END_OF_DOCUMENT_TOKEN_TO_BE_REPLACED