You are here: Home / Backyard Birds and Buds / Swimming With The Fishes 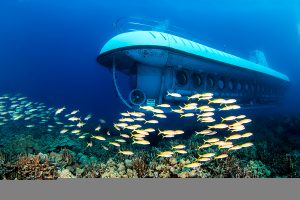 Nancy and I were having breakfast in the cafe, with the ship docked  just off the coast of Kona. About 500 yards from the ship, I saw a school of tuna chasing baitfish off the port side. It was hard to judge, but they appeared to be 30 or 40 pound yellowfin tuna. While a tuna will eat a ten pound bluefish, a whale will eat a 50 pound tuna like we would munch on a pretzel. I has hoped that a big humpback would attack then tuna, but they apparently weren’t in the area. Seeing fish this early on our one-day tour of Kona was a good sign, for today – as they said in The Godfather – we would be swimming with the fishes. We had booked a morning trip on Atlantis, a miniature submarine.

We took tender boats to the sub which had surfaced several hundred yards offshore.

Carefully, about 80 of us were ushered into the bowels of the sub equipped with special glass windows. After an in-depth course in submarine safety, the captain gave the word: “Dive, dive, dive!”

And dive we did.

The ship eased along the sea bottom like a great white shark looking for feet and toes. Quickly, we saw fish – hundreds of varieties – and we saw the massive coral reefs which attracted all the diverse marine life. There were several sunken ships in the area and each offered shelter for the fish, ranging from small yellow tang fish to 20 pound albacore to several sharks in the four-foot range.

The prominent color of these fish was yellow. Our guide said that when you get below 20 feet or so, yellow is the only color that these violet waters won’t filter out. Any fish that were really red or greed, would thus appear black.

I found it interesting that the majority of fish were feeding on or in the reefs themselves, and not on one another, though there are several predator fish, including bluefish and flounder that would be delighted with a seafood dinner.

We prowled along the bottom in depths of 100 feet and it was fascinating. In an hour we surfaced – still in one piece. I would do it again in a heartbeat.

We had no excursions planned the rest of the day, so we wandered out in the parking lot and found a cab driver named Victor who said he would give us a custom tour.

Victor was half native Hawaiian and half Polynesian, so he had a good feel for the culture and sights in the area. His father had toiled in the cane fields and he came from a farming family.  We had a leisurely and instructional afternoon tour. We stopped by a couple of coffee farms and processing centers in this world-renowned area that produces Kona Coffee.

If you look for Kona Coffee back on the mainland, don’t be confused by the labels. Some blends may say Kona, but have only a small percentage of Kona coffee beans. It must say 100% Kona Coffee to be the real thing.

We also stopped by the Painted Church in Kona and took a scenic drive along the amazing coast with a panoramic view if the inky Pacific waters.

Our venture was highlighted by a visit to Kona Botanical Gardens not far from our ship. The trees, shrubberies and flowers were breathtaking.

We returned to the ship, looking out over the Kona Bay. Without a doubt, this is the loveliest port of all the stops in the Hawaiian Islands.

Where Have All the Robins Gone?

I am Jim Brewer, Editor of the new CvilleBuzz, a humble on-line attempt to entertain those, not only … END_OF_DOCUMENT_TOKEN_TO_BE_REPLACED