You are here: Home / Backyard Birds and Buds / Robins Galore 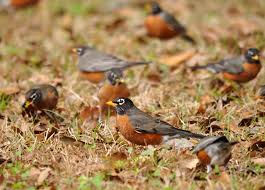 All the robins in North American were in my yard this week. Maybe not all of them, but a bunch. Yet, the week before there were none.

The bird folks say that the American Robin’s spring migration generally follows a line formed by 36-degree average temperatures, and that makes sense because in winter robins need to either eat fruit or to have soft dirt and wet leaves available in order to scratch up worms and grubs.

The bird folks also say that all robins do not follow the same rules. Some stick around, even in the coldest temperatures, while others migrate. Last winter, for example, we had one robin who stayed in our yard, even in the snow, eating sunflower hearts from the feeder. So, with robins, you never know.

As a rule, though, robins are nomads in the winter, moving from place to place in search of food. If they find a concentration of food (fruits), they stay. Otherwise, they scatter.

Another interesting tidbit. Robins sing when they arrive in their breeding territory. Sometimes they sing even in their winter flocks, due to surging hormones as the breeding season approaches. However, in the majority of cases, robins wait to sing until they have reached their territory.

So if you wake early in the morning, at first light, and you hear a chorus of robins, you know spring has arrived and robins will soon be on the nest.

The Return of the Thrushes

I am Jim Brewer, Editor of the new CvilleBuzz, a humble on-line attempt to entertain those, not only … END_OF_DOCUMENT_TOKEN_TO_BE_REPLACED