You are here: Home / Backyard Birds and Buds / Ricky Raccoon: Our Nighttime Visitor 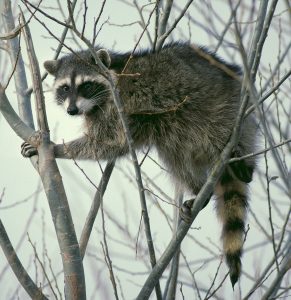 We have one of those light sensors rigged to the spotlight in our backyard. The other night, it flashed on and Nancy – ever the worry wart – got up to check it out.

“Come see this,” she said, rousting me out of bed.

There he was, Ricky Raccoon, clinging to our birdfeeder with sunflower hearts. Somehow, he had managed to climb over the baffle which keeps squirrels at bay, and he had practically stuffed himself inside the feeder. We shooed him away, and he reluctantly sulked off. A few nights later, he had returned and tipped over the trash can with bird seed. Fortunately, the lid stayed on and he was unable to continue in his pilfering ways.

This is the time of year when raccoons not only travel looking for food, but also for housing as they begin their search for a cozy place to spend the winter. Raccoons don’t hibernate, as such. Rather, they go into a state of something called “torpor” where they expend very little energy and can just snooze away. They are notorious for finding a small hole leading to an attic. Our neighbor’s vacated home across the street offered just such a situation and another neighbor observed a coon going in and out of the attic entrance at will.

A few years back during an unusually large snowfall, I saw a big ball of gray in a leafless tree in the backyard. It was a big fat coon riding out the storm. He stayed for three days, then scooted off.

They say that nothing attracts unwanted raccoons more than pet food in the yard or outside on the porch. So if you don’t want a coon invasion, bring the food inside. Also, keep a watch on any possible entrance holes to your house – lest Ricky Raccoon spends this winter in your attic.

An Awareness of Bullfrogs

I am Jim Brewer, Editor of the new CvilleBuzz, a humble on-line attempt to entertain those, not only … END_OF_DOCUMENT_TOKEN_TO_BE_REPLACED