You are here: Home / Backyard Birds and Buds / Purple Beauties 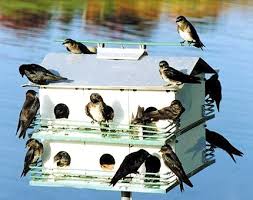 One of the highlights of our three-day jaunt to Nags Head occurred every day from the balcony of our room. There was a purple martin colony not 20 feet away. There were 18 nests and the beautiful birds were all in process of feeding and tending to their young.

I have seen purple martins from a distance, but never really knew much about them, other than they were quite social and formed colonies, or groups. I didn’t know, for example, that each winter they fly en masseto South America – all of them. Then in winter, those from the East Coast return to North America, arriving on the southern coast of Florida around Christmas time. Gradually, as the weather cooperates, they work their way up the Atlantic Coast until they find the exact place they nested before. Yearlings, however, will often break away to form new colonies.

Purple martins are the largest of the swallow family. They say that if there is a martin colony nearby, there won’t be any mosquitos. Perhaps, but the favorite food of these black and purple beauties is a big, juicy dragon fly.

From our balcony, we watched as both the male and female parent would fly off and intercept small bugs in mid-flight. Amazingly, they can catch 4 or 5 of these tiny bugs in their beaks, one at a time, without losing any. Then, they return to their nests and distribute their bounty, making sure each chick gets a morsel. It must take thousands of these small insects daily to feed 3 or 4 chicks – martins typically lay 3 to 6 eggs, but have only one nest per year.

Locally, the Wood family in Louisa County hosts a Purple Martin Field Day each year in June, advising about the birds’ habits and how to establish a colony. The Louisa farm had their first colony of just 4 pairs in 1992 and now have more than 130 pairs.

I would dearly love to have a colony in my yard. They are fascinating and beautiful creatures. And I hate mosquitos.

I am Jim Brewer, Editor of the new CvilleBuzz, a humble on-line attempt to entertain those, not only … END_OF_DOCUMENT_TOKEN_TO_BE_REPLACED