You are here: Home / Backyard Birds and Buds / My Three Crows 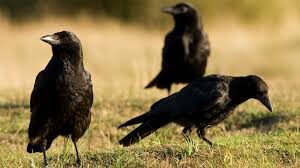 I don’t know if they are the same crows that have been hanging out behind my house for years, or a new trio, but I have and have had three crows to visit my yard for a number of years.

I like crows. They keep the hawks at bay, they harass grackles and eat their young, and they don’t seem to bother our plantings. I enjoy feeding them bits of cracked corn and especially stale bread ends. We save the bread and crumble it up along the back fence. Within minutes, the watchful crows swoop down, help themselves to a scrap of bread and then fly to the birdbath. They like to dunk the bread before swallowing it, sort of like we dunk a donut in a cup of coffee.

My three crows are not confined to my yard, they travel around the neighborhood, but they make at least 2 or 3 visits a day to check for hawks and any bread they may have missed.

Crows are among the most intelligent of all birds. In fact, their intelligence is on a par with chimpanzees. They are actually able to use tools, sometimes ripping off a splinter of wood to spear their prey lurking in a hole. They have an extensive vocabulary and can hold a grudge for several years. In an experiment, researchers wearing caveman masks captured crows on the Washington University campus with nets, then released the birds. When the researchers later walked across campus wearing the same mask, the crows scolded and dive-bombed them. More than 10 years after capturing just seven crows, more than half of the crows on campus still raised the alarm at the sight of a caveman mask.

They also mourn the loss of other crows. When a crow comes across the the dead body of another crow, it will call out to alert others in the area, who gather and begin to make a ruckus themselves.

These interesting creatures have adapted quite nicely to urban life in America. Their population has expanded by nearly 20 percent over the last 40 years. There is now something like 27 million crows in the United States and three of them hang around my back yard.

I am Jim Brewer, Editor of the new CvilleBuzz, a humble on-line attempt to entertain those, not only … END_OF_DOCUMENT_TOKEN_TO_BE_REPLACED