You are here: Home / Backyard Birds and Buds / My Pet Robin 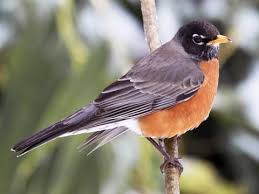 It began about a month ago as I was feeding mealworms to my bluebirds in a guarded feeder with a dome on top that allows small birds entry, but not larger birds, like robins.

But every time I went to feed the bluebirds, a robin showed up, gobbling any meal worms that may hit the ground. Mr. Softie here felt sorry for the robin and began tossing a few meal worms on the ground deliberately.

A few days later, as I was sitting in my chair watching the goldfish do their synchronized swimming routine, my pet robin hopped up near my chair, saw the meal worm container and said, “Feed me.”

So I tossed a few mealies at my feet, and she (I think it’s a she) scooped everyone into her beak and flew across the fence to her nest. Soon, she was back for more.

This continued for about 10 days. Every time I went outside, the robin flew over to bum a few worms.

But two days ago, something strange happened. A robin hopped over to my feet and it looked awful. All its tailfeathers were missing and it appeared to have challenged a bobcat to a wrestling match and got pinned. Feathers were ruffled and partly missing, but I tossed out a few meal worms and it gobbled them up.

“If this is my pet robin, it’s on death’s door, “ I thought. Then, the robin hopped off and disappeared. I figured it couldn’t fly and was probably dying. The next morning I saw it under a bush, tossed out some mealies, it ate them, then disappeared again.

That afternoon, the robin was back at my feet on the patio, but this time there was a larger robin directly overhead singing its heart out. When the tussled robin hopped away, a larger  robin – the mother – flew to its side. The little robin was a juvenile, probably the offspring of the pet robin I had been feeding.

So now I guess I have two pet robins. Better order another 3,000 meal worms.

Swimming With The Fishes

Babies On the Way

I am Jim Brewer, Editor of the new CvilleBuzz, a humble on-line attempt to entertain those, not only … END_OF_DOCUMENT_TOKEN_TO_BE_REPLACED