You are here: Home / Backyard Birds and Buds / My Clockwork Catbirds 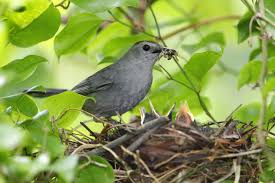 Like clockwork, they come every March. My one pair of resident catbirds. They’ve been regular visitors for the past 7 or 8 years. I have read that many birds use the exact same nesting site from year to year, even different generations. I’m confident that this is true of my catbirds.

Catbirds, though not colorful, are beautiful, graceful birds and they are almost as friendly as my bluebirds. I can approach them on the feeder and they stay put.

Catbirds are not large, about the size of a cardinal. Their name comes from the cat-like sound they can make. They are also wonderful singers, with a variety of songs and notes. The Chippewa Indians called them “The birds that cry with grief” due to their raspy calls.

Catbirds prefer berries and fruit, but eat many insects during the summer – ants being among their favorite snacks. I see them often at my sunflower heart feeder. My suspicion is that they get the husked seeds and take them to their young

The lovely grey birds build cup-like nests in very dense growth, like hedges. The eggs are light blue with usually 2 or 3 per nest. I feel pretty confident that they nest in the thick hedge behind my neighbor’s house, though I have never seen it. Both the male and female (there is little difference in appearance) take turns feeding their young. Catbirds are very aggressive towards potential predators and attack with hissing sounds to actually peck away at anything that comes close to their nest.

In September, catbirds begin to congregate in small flocks and begin their migration to the south in October. Then, next March or early April, they return.

If you don’t have catbirds in your yard, it’s likely because you don’t provide them with sunflower hearts. It is the universal bird attractor.

I am Jim Brewer, Editor of the new CvilleBuzz, a humble on-line attempt to entertain those, not only … END_OF_DOCUMENT_TOKEN_TO_BE_REPLACED