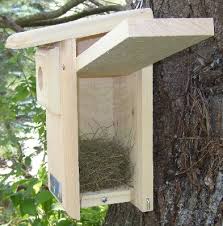 Our second nesting of bluebirds had just hatched. I saw both the male and the hen entering the house with worms and leaving empty handed. The next morning, we discovered the bad news. Something had gone in their house and taken all the baby bluebirds. My suspicions are either a snake or a racoon – probably a raccoon. This was the first time I have ever lost a bluebird nest to predators, and I suppose it was ultimately my fault.

Last year, we had an extra bluebird house in our shed and Nancy said to hang it somewhere. There was really not a good place in the yard, so I just nailed it on the side of a maple tree about 6 feet off the ground and the bluebirds chose that house for their second nest.

In retrospect, there was nothing to stop a climbing predator, like a snake or coon, from shimmying up and snatching the babies. I will take that house down and try to find another  place on the side fence, though I might have to improvise.

In the meantime – and this is incredible – the pair of bluebirds went to their old house immediately, that very morning, to freshen up the nest and try again.  I don’t know why – after successfully fledging healthy babies – they did not go back to that house in the first place, perhaps because of the wire in top of my garden cage, but they’re at it again.

I just hope it doesn’t get so hot that the hen suffers, or it’s too hot for the babies. I have found that if bluebirds don’t complete the second nest, they will keep trying – and mine are – again.

I am Jim Brewer, Editor of the new CvilleBuzz, a humble on-line attempt to entertain those, not only … END_OF_DOCUMENT_TOKEN_TO_BE_REPLACED