You are here: Home / Backyard Birds and Buds / In Search of Backyard Miracles 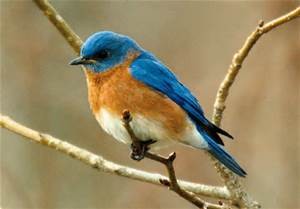 If you have a backyard, or some woods and meadows near your home, genuine miracles are happening every day. Birds are nesting, all wildlife is busy raising little ones and the plant world is bursting at the seams.

It appears all birds may have nested early this year. Don’t know exactly why, but many turkey hens were on nests sooner than usual. So were grouse. Maybe it was the quick green-up in the woods following an awfully wet and snowy winter. Or maybe it was that after surviving last winter, birds and animals figured they better make hay while the sun shines. Possibly, because of last winter’s scare, birds may be trying to squeeze in an extra hatch. Bluebirds, for example, can rear as many as three clutches if conditions are right and doves can have as many as four nests in a season. Turkeys will only raise one batch, but if they lose the first nest, they can try again if they had an early start.

Bluebirds are fascinating creatures. They are one species of birds with which humans can create a relationship. Most other birds will fly away if you crowd them, but bluebirds come to know their human friends. When they nest in our yard, we speak on a daily basis, as I provide mealworm dinners for my little blue friends. I have a small feeder near their bird box and bring them goodies nearly every day. I call to them before I come, they recognize my voice, fly up to their favorite tree limb perch, then swoop down to eat when I’m about 10 feet away, In the past, I have been able to get close enough to touch them, but I didn’t of course,

I find this interesting about bluebirds. When the chicks leave droppings in the nest, the male and female will carry the excrement in their mouths to a distant spot to get rid of it. If they just scratched it out of the nests on the ground, every predator in the world would be at their doorstep, including snakes, raccoons, cats and others.

A few weeks ago we noted an adult rabbit inspecting our yard. I though she was looking for clover – or possibly eyeballing my garden plot – but it turns out she was looking for a nest. She made it by burrowing a hole in our flower bed among the phlox, then lined the make-shift crib with soft grass and bits of her own fur. Should be a bunch of little rabbits coming soon.

One of the most remarkable things we’ve seen this spring was a mother robin with a beak crammed full of pine needles. The robin flew to one of our several birdbaths and proceeded to dunk the pine needles in the water several times so that she could later bend and mold the needles to form her nest. Last time I checked Barnes & Noble, there were no manuals on nest building for robins, nor instructions for mother rabbits on where and how to dig a burrow.

It’s instinct, of course – all that information passed from generation to generation in something as tiny as a gene. Our own backyards are full of miracles if we just pay attention.

Need A Frog? Go To Springdale

I am Jim Brewer, Editor of the new CvilleBuzz, a humble on-line attempt to entertain those, not only … END_OF_DOCUMENT_TOKEN_TO_BE_REPLACED