You are here: Home / Backyard Birds and Buds / I Have the (Baby) Blues 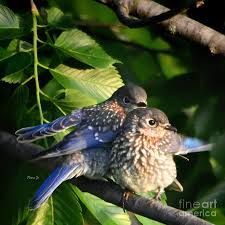 The adult bluebirds responsible selected the house on our fence last November. Almost daily, they have checked out the box and any bird or squirrel that drew near was dive-bombed – and this was before they built. I don’t think these are the same two that nested here last year, but probably their offspring. Birds often return to their place of birth and raise their young. It’s a homing instinct.

Our bluebird family began building the nest in early March, with the female laying an egg each day or so. She went on the nest  around March 20, the chicks hatched in early April and the results are sitting side by side in the front yard tree.

And for the first time ever, these bluebirds did not take their young ones away from our yard. They haven’t left so far and I assume they won’t. All the others have vamoosed within a day or two, but returned again to re-nest in the same house. Sometimes, bluebirds will change houses for the second nest, but not mine. In fact, the day after the chicks fledged, the male bluebird was poking his head inside the house, checking things out.

Some think that the original nest should be removed after the  first clutch, while others say to leave it in place. I always leave the nest in place if everything goes well and if the empty nest looks presentable. It just saves the adults some time and effort. My guess is that in about 2 weeks, the female will go on the nest again.

Bluebirds generally nest only twice, but if they lose a nest or if something gets the young ones, they will occasionally have three clutches.

I have now ordered a total of 11,000 meal worms. When the next family arrives, I will be ready.

I’ve Got the Butterflies!

I am Jim Brewer, Editor of the new CvilleBuzz, a humble on-line attempt to entertain those, not only … END_OF_DOCUMENT_TOKEN_TO_BE_REPLACED