You are here: Home / Backyard Birds and Buds / Hummers on the Way 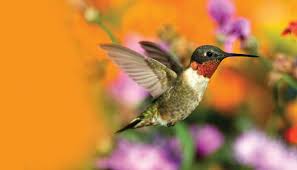 Break out the hummingbird feeders. The little fellows have arrived.

Perhaps I should at least one has arrived. I saw him in the back yard Monday, snooping around. We have lots of blooms in the yard, but no feeders out  – yet.

Hummingbirds are usually late arrivals in our yard, sometimes June or July, so this was pretty early for our area. In and around Orange, hummers fly through in mass as early as late March and early April. I think it’s on their northern flyway. I was at one lady’s house doing an interview several years ago and there were literally dozens of hummingbirds at her feeders – none of them fighting. She said they were just visiting for a spell, but would soon leave.

The bird folks say to put up feeders around mid-March, to attract the early migrants. They also advise not to wait (like we did) to see the first hummer before hanging your feeder. An ideal place to hang a nectar feeder is in a spot that gets a mix of sun and shade. If the sun is too intense, it spoils the nectar and it goes bad.

If you want to plant to attract Hummingbirds, the Audubon people recommend brightly colored flowers. Tubular blooms hold more nectar and are thus more attractive to hummingbirds. These would include flowers such as bee balms, columbines, daylilies, hollyhocks, cleomes, impatiens and petunias.

So… if you haven’t already put out hummingbird feeders, get with the program.

A Time To Sew

Mealworms For The Birds

I am Jim Brewer, Editor of the new CvilleBuzz, a humble on-line attempt to entertain those, not only … END_OF_DOCUMENT_TOKEN_TO_BE_REPLACED