You are here: Home / Backyard Birds and Buds / Harry The Heron 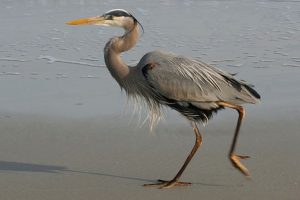 Tim and I were fishing on a pier in Urbanna Creek. Nothing was biting, but we continued casting, hoping a striper or trout would pass by.

Suddenly, a Great Blue Heron flew towards us and landed on the pier about 10 feet away. I figured he hadn’t seen me, and would soon fly off, but I was wrong. He did see me and walked close enough that I could have patted him on the head.

One of my several unique talents is the ability to speak in “Heron-ese” so Harry the Heron and I began this conversation:

Harry: Having any luck?

Harry: I was hoping maybe you had a fish to spare. I can’t find a thing in shallow water.

Me: Wait here, I’ll be back in a minute.

So Harry waited while I went in the cottage and  retrieved a few freshly shucked oysters, then returned to the dock.

Me: Sorry I don’t have any cocktail sauce, but try this, and I tossed an oyster in front of him.  Harry went over to the lifeless oyster on the deck and backed away.

Then Harry waddled up to the end of the pier where my associate was fishing. Mr. Tigner said he didn’t have any fish, either, but then he caught one, about a 9-inch striper.

Tim tossed the fish on the dock and Harry pounced on it, grabbing the no-longer-wiggling fish in the center, then flying to shore.

Me: Harry, that’s an undersized striper, you’re not supposed to keep any that small.

Between gulps, Harry said that he had it on Higher Authority that he could eat anything he damned-well pleased.

This heron had obviously been training humans to catch fish for him, and I’ve seen this before.

I once saw a pelican on a dock in the sound at Nags Head that followed the cottage owner around like a pet dog, hoping for a shrimp or a fish. There was also a crippled sea gull at Lake Orange a few years back that used to beg for spare fish on the lake’s pier, so I know birds can be quite the beggars, but it was really unusual to observe a Great Blue Heron cozying up to a man. In the past when I have come upon one back in a secluded cove, they have always squawked and flown away, but not Harry.

They call them Great Blue Herons but Harry was mostly grey. He had a 5-inch beak that looked like it would chisel concrete and mustard colored eyes.

The last fish we tossed him nearly escaped as it slipped away and was headed back in the water, but faster than the eye can see, Harry nailed it with his beak, in mid-air. They have amazing reflexes.

Herons are large birds. This one came up to my waist, but they are mostly just feathers and bones. I doubt if he weighed 4 pounds.

Herons are at home in both salt and fresh water and generally feed by standing dead still until a fish passes by. Then, bam! No fish.

To have a magnificent heron within an arm’s length, begging for fish, was an amazing experience and one I won’t soon forget.

A Gift For The Birds

Where Do They Go?

I am Jim Brewer, Editor of the new CvilleBuzz, a humble on-line attempt to entertain those, not only … END_OF_DOCUMENT_TOKEN_TO_BE_REPLACED