You are here: Home / Backyard Birds and Buds / Hairy the Spider 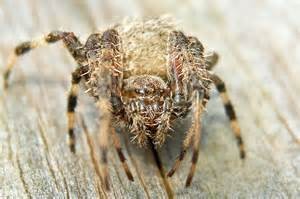 I noticed him a couple weeks ago when I was bringing my morning paper in the house. He (maybe she) had spun a web extending from the eave over our small deck down to a gatepost below. Inside the web there appeared to be what was the remains of a moth. Yet, in two hours the web and its contents were completely gone. Vamoose!

It turns out that Hairy, our resident spider, is a Spotted Orbweaver, or so says Google. His scientific name in Neoscona Crucifera and even Google doesn’t know what that means.

I usually have little or no interest in Arachnids unless they bite me, but I found my backyard friend to be fascinating. The first thing I noticed was that he was a hairy little devil, therefore the name. Hairy is dark tan with spots and a hairy body to rival the caveman on TV commercials.

My wife, who views spiders about the same way as Count Dracula looks at a huge clove of garlic, claimed that Hairy spins his web at night then eats it in the morning. Then, he hides all day and comes out again at night. Not that I doubted her, but I looked it up and its true.

Orbweavers frequently build webs on sheds, houses and other man-made structures. They are attracted by light, which also attracts mosquitos and bugs. During the night, Hairy hangs with his head down in the center of the web. Each morning, Hairy eats his web and therefore recycles the rich protein from within. Then he hides during the day close to our house, behind the drain.

Orbweavers mature around August and September when the females deposit their eggs. The egg sac consists of a fluffy yellow or orange silk. The females attach them to a rolled up leaf or some other protected place near the web. The babies, the spiderlings, emerge from their sacs the following spring and remain clumped together for a day or two, after which they disperse. Google says that some spiderlings ride simulated balloons to other locations by using air currents. Some, though, stay relatively close to where they were born. I haven’t seen the egg sac yet, but I’ll keep a close watch.

It is truly amazing the types and varieties of wild things that live among us, even in our own back yards. I hope at least one of Hairy’s offspring will also make our yard his or her homes. After all, you really can’t create a better mosquito trap.

I am Jim Brewer, Editor of the new CvilleBuzz, a humble on-line attempt to entertain those, not only … END_OF_DOCUMENT_TOKEN_TO_BE_REPLACED