You are here: Home / Backyard Birds and Buds / Grackle Attackle 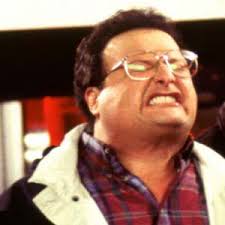 They showed up earlier than ever. At first there were just three, then ten and now fifty. Grackles!
I feel the same way about them as Seinfeld did about “Newman!”

If there were just a few, they wouldn’t be such a nuisance, but they come in droves, they crowd out all my songbirds and they eat all the seeds.

Grackles, actually, are considered songbirds and are thus protected from BB guns and air rifles. But their songs are not those you would want to hear for more than a few seconds. They screech more than sing. They often steal food from other birds and are known to kill adult sparrows.

Grackles often nest in colonies and prefer tall pines. Young grackles happen to be a preferred food of crows, which sneak in and rob the nests. Good job, crows. The more grackles you eat the better.

Since there is nothing I can do to keep the grackles away – short of stop feeding all the birds – I have found that if I strew a lot of cracked corn to the side, they will go to that and leave most of the other seed areas alone. Since cracked corn is fairly inexpensive, that’s my sole strategy to contend with the black pests.

The only good thing about grackles is that they eventually leave – usually around June, after they nest.

Then no more “Newman” grackles till next March.

On the Watch For bluebirds

A Bunch of Horse Manure

I am Jim Brewer, Editor of the new CvilleBuzz, a humble on-line attempt to entertain those, not only … END_OF_DOCUMENT_TOKEN_TO_BE_REPLACED