You are here: Home / Backyard Birds and Buds / Grackle Attack 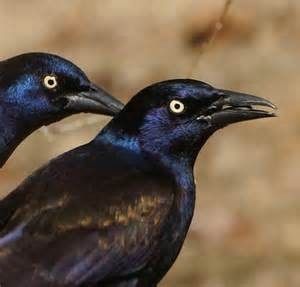 They come in swarms, just as spring arrives. Only this year they came early. The grackles, that is. And they’ll eat you out of house and home.

Throughout the winter, I feed my birds sunflower seed hearts. Because it has already been shelled, birds such as robins, mockingbirds and my beloved bluebirds can eat and digest the hearts. But sunflower seed hearts and chips are expensive, about twenty bucks for a 10 pound bag. When the grackles zero in on the sunflower hearts, they can drain a feeder in hours, even those feeders meant for smaller songbirds. They just keep coming and coming and coming. There were about 50 in the flock that settled in near my house in early March.

Grackles are fairly large birds, not as big as a crow, but almost. The males and females look nothing alike.

Adult males have a long, dark bill, pale yellowish eyes and a long tail; its feathers appear black with purple, green or blue iridescence on the head, and primarily bronze sheen in the body plumage. The adult female, beyond being smaller, is usually less iridescent; her tail in particular is shorter, and unlike the males, does not keel in flight and is brown with no purple or blue gloss. The juvenile is brown with dark brown eyes.

If there were only a dozen or so grackles, that wouldn’t be so bad, but I can’t afford to feed 50 grackles expensive seeds.

Though it breaks my heart, I discontinue the sunflower seed hearts as soon as the grackles arrive and put safflower seeds in my main feeders. Fortunately neither the grackles nor the squirrels (another feeder pest) like safflower seeds and the large flocks eventually disband. When they leave, I resume feeding my backyard friends the sunflowers, and have discovered that adult bluebirds not only eat those seeds, but will feed them to their young.

So, if you have more grackles than you can afford to feed, just switch to safflower seeds for a few weeks and the pests will ultimately go away.

A Cure for Yucky Ponds

A Matter of Timing

I am Jim Brewer, Editor of the new CvilleBuzz, a humble on-line attempt to entertain those, not only … END_OF_DOCUMENT_TOKEN_TO_BE_REPLACED