You are here: Home / Backyard Birds and Buds / Flying Dragons 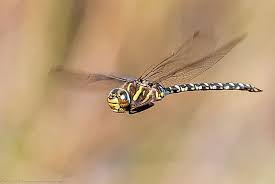 Sitting on the back patio last week, I saw four dragonflies buzzing across the lawn. Since then, I have noticed dragon flies seemingly everywhere. Maybe they’ve been there all along and I didn’t notice them, or maybe it’s just been a really good year for dragonflies. Whatever the reason, they are interesting creatures.

I watched one dragonfly intently. He hovered like a tiny black drone, then attacked. They eat other bugs, catching them in mid-air, which takes a lot of agility. They say if you have a family of dragonflies in your yard, you won’t be bothered by mosquitoes. They snatch them out of the air, like flying hors d’oeuvres, but instead of catching with their mouths, they grab their prey with outstretched forearms.

Dragonflies and their kissing cousins, damselflies, are predators in both their larval stage and their adult cycles. The aquatic larva eat everything from other aquatic insects to tadpoles.

As a rule, dragonflies have their wings extended when at rest while the damselflies hold their wings up like a tent.

Damselflies are fast, but dragonflies are faster. It’s hard to imagine any predator fast enough to catch a dragonfly but certain small hawks are capable and swallows will occasionally connect.

Both dragonflies and damselflies come in a rainbow of colors as described in the poetry of Lord Tennyson.

In Asia, dragonflies are used in traditional medicines and in Indonesia they are caught for food.

I read recently that radar was actually picking up some dragonfly activity. So others must be seeing them, too.  Next time one graces your yard, watch it. They are really fascinating creatures.

I am Jim Brewer, Editor of the new CvilleBuzz, a humble on-line attempt to entertain those, not only … END_OF_DOCUMENT_TOKEN_TO_BE_REPLACED