You are here: Home / Backyard Birds and Buds / Ducks and More Ducks 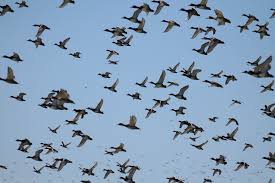 I was on our deck over-looking the ocean just after sunset, enjoying a cigar and a cocktail when I saw them coming. They were headed south, down the beach, a long string of ducks. I tried to calculate their numbers – a hundred here, then another hundred and another. I figured there were close to a thousand ducks headed for who-knows-where. Then, from the same direction, I saw another long string with at least as many as the first gang of birds. Then, more and more strings, anywhere from 500 to a thousand birds per flock. When they finally finished, I estimated somewhere between 15,000 and 20,000 birds. That’s a lot of ducks.

I couldn’t figure out why they were headed south, not north, but I supposed they were aiming for the huge waterfowl refuge above Oregon Inlet. Perhaps they were spending the night, perhaps they were going there to feed, but I’ve never seen so many ducks in one group.

The very next morning, here they came back up the beach, tens of thousands of them, obviously the same group.

These, I assume, were sea ducks. They were average size ducks, about the size of a mallard. They were brownish with a light patch on their upper chest. I have no idea what kind of ducks they were.

The next evening, the huge mass of ducks did not pass by, but a big flock of larger black ducks with red heads passed directly overhead – about a thousand in all.

It was fascinating to be able to see those huge numbers of ducks.

Mealworms For The Birds

I am Jim Brewer, Editor of the new CvilleBuzz, a humble on-line attempt to entertain those, not only … END_OF_DOCUMENT_TOKEN_TO_BE_REPLACED