You are here: Home / Backyard Birds and Buds / Don’t Fence Me In! 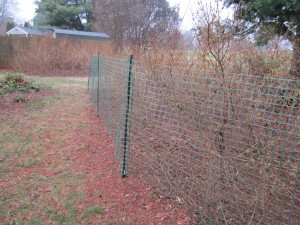 Back yard gardeners in central Virginia – and in most other parts of the entire country – have a deer problem. More than drought, more than a late cold snap, more than a swarm of locusts, deer represent the biggest threat of all to azalea bushes, hasta plants, lilies and most every vegetable in a garden. Deer have adapted quite nicely to man, thank you very much, but the reverse is not necessarily true. Some folks still enjoy a little uneaten greenery in their yards and who doesn’t relish a fresh mess of green beans or an ear of sweet corn?

Because of the super abundance of urban deer, many of my fellow backyard gardeners have simply given up. They’ve retired their spades, shovels and Roto-Tillers to the mothball fleets in their tool sheds. They have given up in the never-ending battle against the ravenous deer. “What’s the use? I quit!” they say dejectedly.

Two years ago, I was debating whether or not to plant one more garden. I was most depressed to have done all that work over the years while reaping few rewards. But I decided if the deer won, it would not be because I didn’t put up a good fight, so I bought a case of Irish Spring soap (a known deer repellent), three different types of spray on deer repellent and I constructed a simple fence around my small garden spot. I was fortunate to have one long side of the garden bordered by an impenetrable wood fence. All I needed was a makeshift fence around the other three sides. With some steel poles and 4-foot mesh, I blocked off the garden and it worked. Deer, obviously, can jump across a four-foot fence, but they don’t like to jump into confined spaces, and I haven’t had a deer in my garden for the past two seasons.

My wife, Nancy, however hasn’t been as fortunate with her back yard plantings. She has sprayed gallons of pungent liquids all over the yard in an attempt to deter the thieving beasts, only to have it rain one night and – bingo – no more impatiens.

“What if we put a fence across the back of the yard, where they enter?” she suggested. Two problems with that idea: First of all, our back yard property line has many obstacles – forsythia bushes, tool sheds and other obstructions. Secondly, it was all I could do to draw upon my limited mechanical skills to put a simple fence around my small garden plot. For me to devise a back yard fortress was above my pay scale – or so I thought. However, my wife enticed me to a morning visit to Lowe’s and suggested that instead of having a straight-line barrier, I could stagger the poles and fence and work around the obstacles.

So I bought a dozen 4-foot metal stakes and two 50-foot rolls of green polymer mesh, exactly 4 feet tall. The stakes went up easily and so did the fence. In an hour, the deed was done and we have effectively sealed off the rear of our yard from nocturnal visits from the resident deer population. I hung some Irish Spring bars along the fence to further deter the deer and I believe it’s going to work.

Best part. We did it for just a little over a hundred bucks. We have spent at least twice that much annually on expensive deer spray.

So don’t give up. Don’t ever give up. Erect an inexpensive fence this spring and help yourself to a nice mess of green beans later this summer.

I am Jim Brewer, Editor of the new CvilleBuzz, a humble on-line attempt to entertain those, not only … END_OF_DOCUMENT_TOKEN_TO_BE_REPLACED