You are here: Home / Backyard Birds and Buds / Catbirds Are Still Around 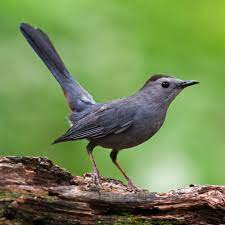 I thought my catbirds had gone, they usually do each year, then pop up in the spring. But a few days ago, I heard the strange call,

“Merrow”, like a cat, and they are still here. At least a couple are. We had two catbird families this year. They skirmished throughout the spring and summer at the Peanut Suet Bar I had hanging. Since their chicks hatched, though, they have largely left the suet alone. I suppose it was like Pablum for birds, easy to digest for the young ones. They have since been spending a lot of time in my enclosed garden, where we also have several vines of grapes now beginning to ripen. The catbirds are small enough to squeeze through the chicken wire holes and help themselves. They are welcome to the grapes. I have plenty to share.

Catbirds have quite a repertoire of songs. They have that cat-like noise they make, but they also have a lovely singing voice. They are able to mimic the calls of many other birds and sit high in the branches offering their serenades. Birders say they stay around until about the last week of September or first week of October, then gather in large numbers to migrate, returning in April.

I wish they would stick around all year, but I will enjoy having them for however long they stay.

I am Jim Brewer, Editor of the new CvilleBuzz, a humble on-line attempt to entertain those, not only … END_OF_DOCUMENT_TOKEN_TO_BE_REPLACED