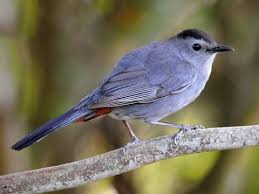 Pack up all my cares and woe. Here I go, singing low

This shows how old I am, that I would remember some of the Jerome H. Lemrick’s lyrics to Bye Bye Blackbird. It also speaks to the annual departure of one of my favorite backyard birds – the catbird.

They came as scheduled this April, two catbirds, and they hung around constantly in my yard, visiting the feeder and birdbaths and calling out their mournful “mahroww” type song.

Then, they had little ones and two catbirds became four.

They discovered my Peanut Log suet and pecked away. I think this was their main form of nourishment.

I had hoped the logs might entice them to stick around, but they skipped town last week. Haven’t seen hide nor feather since.

I have several birds like this. Thrashers also come early in the spring, then leave, though they are still here. Hummingbirds come in June then leave in October. Goldfinches will often disappear come fall.

During the last part of September, large numbers of catbirds can often be seen in parts of Virginia as they gather for their migration. To our east, catbirds are year round residents, but Albemarle is apparently one of those summer -only counties for the pretty birds.

Come April, I hope to see them again. In the meantime:

No one here can love and understand me

Oh, what hard luck stories they all hand me

Make my bed and light the light

Hummers on the Way

I am Jim Brewer, Editor of the new CvilleBuzz, a humble on-line attempt to entertain those, not only … END_OF_DOCUMENT_TOKEN_TO_BE_REPLACED