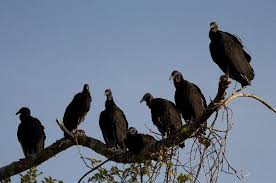 It’s been a good year for buzzards. When deer get careless and don’t look both ways before they cross the road, it means the buzzards dine in style.

And buzzards do us a great service. They keep carrion to a minimum.

But I worry a little about the surge in black buzzards, or black vultures as they re also called.

In Virginia, we have two types of vultures/buzzards, the more common turkey vulture, with a red head and the black vulture, a slightly smaller bird with an entirely black head.

The black vultures are the more aggressive of the two. They will attack and eat living animals, particularly the young of the year, and when they set up shop in a tree near you, it’s not a pretty or good-smelling situation.

A couple days back I saw two large flocks of black buzzards within a mile of each other. One flock appeared to have about 30 or 40 birds, an unusually large flock. The other group had about a dozen birds and both flocks were working mightily on deer carcasses beside the road.

Black vultures soar high in search of a scent, but their sense of smell is less developed than their cousins, the turkey vultures. Therefore, they combine their forces and search and feed in flocks, whereas the turkey vulture usually feeds alone. Because of superior numbers, the black vultures will chase away the solitary turkey buzzard when a kill is discovered.

Interestingly, turkeys and buzzards are distant relatives, hence the name turkey vulture. But the buzzards are nasty birds. They actually poop on their own legs to keep cool.

Next Thanksgiving, I think I’ll pass on the turkey legs and have a slice of breast instead.

Where Have All the Finches Gone?

Worms In The Driveway

I am Jim Brewer, Editor of the new CvilleBuzz, a humble on-line attempt to entertain those, not only … END_OF_DOCUMENT_TOKEN_TO_BE_REPLACED