You are here: Home / Backyard Birds and Buds / Bumper Crop of Okra 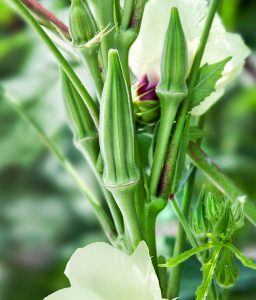 All in all, I have had a pretty good garden this year. I had an early crop of creasy greens – left over from the plantings of previous spring. I had some nice lettuce, beets, onions, tomatoes, and yellow squash. The rabbits ate all of my peas and most of my cucumber vines, but one cuke made it and has been producing overtime to make up for the rest. The lonely vine is still blooming and growing – the latest I’ve ever had cukes. But my bumper crop is okra. It’s still growing and producing a dozen or more pods daily. We have had several batches of fried okra and Nancy has frozen some.

Many don’t like okra, probably because they had the slimy version and the texture turned them off. Our favorite way to cook okra is to roll the diced pods in a mixture of flour and corn meal and fry to a golden, almost black-golden brown. Yumm!

Floyd Collier recently told us that his favorite way to eat okra is to boil the whole pods until just tender, then add salt, pepper and some white vinegar and eat them that way. I think I’ll try that with my next batch. Okra has a wonderful flavor and the flowers on the plants are simply beautiful. I have found that okra does not like the cool weather of early spring, but prefers to be planted in mid-May when the soil is nice and warm. The Clemson Spineless variety will produce all the way through September.

Okra likes full sun and should be planted about a foot apart. A little compost or organic matter mixed with the soil before planting greatly increases production. The pH of the soil, by the way, should range between 6.5 and 7.0.

If you have a backyard garden, or a big garden for that matter, sew some okra seed next spring – but wait until, it’s nice and warm.

I am Jim Brewer, Editor of the new CvilleBuzz, a humble on-line attempt to entertain those, not only … END_OF_DOCUMENT_TOKEN_TO_BE_REPLACED