You are here: Home / Backyard Birds and Buds / Amazing Bluebirds 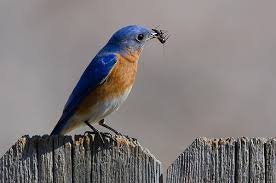 You can learn a lot about wildlife while sitting still and smoking a cigar in your back yard. I suppose you could learn just as much without smoking the cigar, but I need every excuse I can get to puff on a good stogie. I don’t inhale, by the way.

Anyway, on one of the very few recent afternoons that it was comfortable enough to sit outside, I lit up and watched my birds as they visited the feeders and bird baths.

A bluebird flew in for a couple sunflower hearts, then zipped up to his favorite perch about 25 feet off the ground. He sat there for a spell, wiping his bill on a branch when suddenly – zoom – he swooped to the ground about 20 feet to my right and gobbled up some kind of insect.

This impressed me for two reasons: First, that there was even some kind of bug out and about on a chilly February afternoon and second, how did that bluebird spot that tiny insect from that high away?

What amazing vision these birds have and what an awareness.

In the summer, the bluebirds nest in a box directly overlooking my garden spot, and a bug doesn’t have a chance. I don’t need pesticides with my bluebirds around. They are nature’s premiere insect removers and far more beautiful than a spray can of bug killer.

I am Jim Brewer, Editor of the new CvilleBuzz, a humble on-line attempt to entertain those, not only … END_OF_DOCUMENT_TOKEN_TO_BE_REPLACED