You are here: Home / Backyard Birds and Buds / A Snow White Blackbird 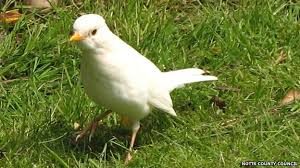 “Come see this bird,” Nancy yelled from the kitchen.

The last time I put down my paper and coffee to get up and see an alleged bird, it was a leaf, so I was not hopeful. But dutifully, I went to the window and saw a snow white bird among a big flock of grackles.

I went outside to investigate.

When the grackle flock flew, the white bird went along. It was the same size and had the same tail and head shape. This was indeed a solid white blackbird. I had never seen that before. Back inside, as the bird drew near to the window, I was better able to see and identify it. It had white legs and feet, unlike the black legs and feet of the others. It also had pink eyes. It was an albino.

In nature, there can be two kinds of birds with odd colored feathers. One is an albino, but the other is leucistic. An albino bird lacks any pigmentation. They are all white and have pink eyes. Creatures with albinism generally have poor eyesight and sometimes deformed parts and don’t survive very well. They are also quite conspicuous, which makes them easy prey.

Albinism is a recessive genetic trait and both parents must carry the gene in order to pass it on. Neither may be white, but they must have some of those genes.

In the bird world, albinism can turn a bird’s plumage pale, but there are distinct differences between albino and leucistic birds. Leucism affects only the bird’s feathers, and typically only those with melanin pigment, usually dark feathers. A leucistic bird with different colors may show some colors brightly, especially red, orange or yellow, while feathers that should be brown or black are instead pale or white. Some leucistic birds, however, can lose all the pigment in their feathers and may appear pure white. Last year, I saw a grackle with some white tail feathers. That bird was leucistic.

Albinism, on the other hand, affects all the pigments, and albino birds show no color whatsoever in their feathers. Furthermore, an albino mutation also affects the bird’s other pigments in the skin and eyes, and albino birds show pale pink or reddish eyes, legs, feet, and a pale bill. Leucistic birds, on the other hand, often have normally colored eyes, legs, feet, and bills.

So, the strange looking grackle in our yard was a true albino, not leucistic. It was a pretty bird, but I still don’t like grackles.

Worms In The Driveway

The Color of Spring

I am Jim Brewer, Editor of the new CvilleBuzz, a humble on-line attempt to entertain those, not only … END_OF_DOCUMENT_TOKEN_TO_BE_REPLACED