You are here: Home / Backyard Birds and Buds / A “Murder” of Crows 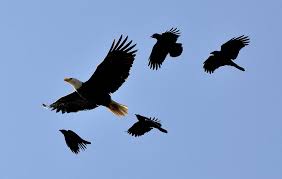 Have you ever been “buzzed” by a bird? Like when they swoop down over your head? It’s a weird feeling.

One spring I had a new pair of bluebirds nesting and went out to feed them meal worms. Babies had just hatched. As I approached, the male “buzzed” me – swooped  down just across the top of my head and clicked his wings together. I left immediately. Later, I was able to convince the birds that I was no threat and they welcomed me – and my meal worms – with open arms. So anytime I see a larger bird being attacked and harassed by smaller ones, I understand.
Last week I saw something I have never seen before, but apparently it’s not a rare event.

I saw a half dozen crows chasing and dive-bombing a bald eagle, Now, that takes nerve. The eagle was several times larger than the crows and armed with talons like a Bengal tiger, but he declined the fight, and simply flew away. Eagles are pretty smart birds, as are crows, But one eagle against five or more crows is not a fair fight. The crows are groupies. They use the strength in numbers approach, and it worked with the eagle. Crows will drive eagles and hawks bonkers. That’s why they call it a “murder” of crows, not a flock of crows.

My resident crows in my back yard do a great job of keeping hawks at bay, so I welcome and feed them. If I had a cornfield, well, maybe not. But crows are my friends and I understand exactly how that eagle felt.

Love Is In the Air

I am Jim Brewer, Editor of the new CvilleBuzz, a humble on-line attempt to entertain those, not only … END_OF_DOCUMENT_TOKEN_TO_BE_REPLACED