You are here: Home / Backyard Birds and Buds / A Delightful Weed 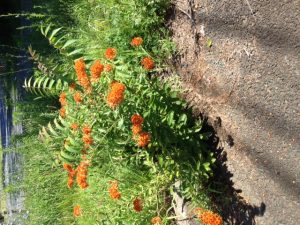 I saw what appeared to be a weed along the side of the road. But the flowers were beautiful, a vivid orange. I marveled at the plant as I drove past almost daily, then decided I had to stop for a closer look. It was growing wild at the edge of a parking lot. I took a picture, then wondered if I could identify this beauty.

This is a most interesting plant. Not only are butterflies attracted because of its copious production of nectar, it is also a valuable larval plant food for queen and monarch butterflies. Hummingbirds and all types of bees also dine on its nectar. It’s a perennial, growing to as much as three feet in height. It flowers in a beautiful shade of orange from summer through fall. It favors gravel or sandy soil, which is why it probably sprouted at the edge of the parking lot. Butterfly Weed requires full sun. A plant will flower and produce seeds in the third year, but it is very difficult to transplant.

They say that Native Americans and our pioneer forefathers boiled the leaves as a way to treat diarrhea and certain respiratory illnesses. Young seed pods were used as food after boiling and the seed pod could be spun and used for candle wicks. What a delightful weed!

Again, I am not a weed expert and this could be something entirely different, but I am going to keep an eye on what I think is a Butterfly Weed, and hope it doesn’t get whacked down. When the pods mature this fall, I hope to collect some seeds.

Our Juncos Are Here

I am Jim Brewer, Editor of the new CvilleBuzz, a humble on-line attempt to entertain those, not only … END_OF_DOCUMENT_TOKEN_TO_BE_REPLACED