You are here: Home / Backyard Birds and Buds / A Better Thistle Feeder 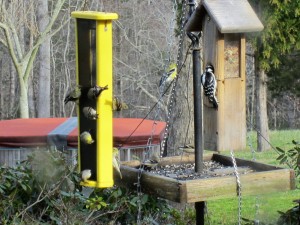 I always enjoy reading C’ville Buzz.  Thank you for taking the time to write all those articles weekly. I’m sure some of that is quite a chore! You do a great job covering many areas of interest to many people.

I read your article about finding a thistle feeder and, having tried those, I wanted to show you one that I think is the best available. It is called Bird’s Choice. The mesh on both sides allows the finches to cling all over it and the fact that the area where the seed is fairly narrow between the two mesh screens, if it gets rained on it can dry out faster than the mesh feeders that are tubular.

I first discovered the shorter one at Fifth Season and then (of course) looked on Amazon and found the longer one. I think I like the shorter one better. The tall one is heavier and blows around a lot in windy storms, spilling seeds and threatening to topple my feeder pole.

I have had both of these for several years and the yellow has not faded and the screen is in perfect condition.  Since “the bear” doesn’t like nyjer seed, when he knocks over the feeder pole, he trashes the woodpecker feeder to get the peanuts, but ignores this feeder.

The guy that owns the land next to ours killed a bear this winter and since then, no more bear hits on my feeders. It must have been “my” bear!

It is so nice the hear all those goldfinches twittering in the trees and now the bluebirds are chortling. Such a sweet sound.

I have not heard many peepers at all and I wonder if that terrible cold late last spring did them in. It’s sad because I love to hear the peepers and they usually start in late February.

The Brown Headed Cowbirds come in and eat the white millet. Since the Chipping Sparrows seem to only like the white millet, I found a domed feeder that I can put the millet in and lower the dome so the little guys can get in but not the Cowbirds. They don’t seem to be interested in sunflower seeds, or nyjer, so they don’t stay long.

I am Jim Brewer, Editor of the new CvilleBuzz, a humble on-line attempt to entertain those, not only … END_OF_DOCUMENT_TOKEN_TO_BE_REPLACED