You are here: Home / Articles From the Past / Kauai: Primitive Splendor 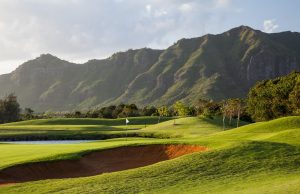 As we approached the island on Thursday morning, we were greeted with jutting cliffs, a full palette of emerald green and angry shorelines of black and rust. I fully expected to see a dinosaur feeding in a grove of bamboo. This is Kauai, a place of extreme beauty and primitive splendor. This is the island movie producers chose to film Jurassic Park, South Pacific and Raiders of the Lost Ark. For the next two days, we will try to absorb all the grandeur of this place called Kauai.

Kauai is the fourth largest island, sometimes called the Garden Island. This is the island they say was home to the first Polynesians escaping persecution in their homeland. Centuries of growth have formed tropical rainforests, tumbling rivers and waterfalls – thousands of waterfalls, as it rains nearly daily. Kauai is home to the Waimea Canyon, named the Grand Canyon of the Pacific, over 3,000 feet deep. It is a picture-perfect depiction of primitive beauty.

Thus it was fitting that I got in a round of golf at the Puakea Golf Course since my golfing friends say that my swing somewhat resembles a cave man with a club.

I enjoy playing golf on the islands, not so much for the golf, but to be close to nature, especially my bird friends, and I was not disappointed. I saw Nene geese, white faced cardinals, myna birds, some strange looking ducks and egrets. I saw what appeared to be an overgrown sandpiper on stilts. The beautiful white-breasted birds had legs at least 7-inches long, but they scooted away as I approached. I saw two types of doves, a larger bird about the size of one of our bridge pigeons and a tiny doves not much larger that a titmouse. I saw golden finches, killdeer and even a mockingbird. And yes, chickens. They are everywhere on this island, but a little skitzy. I could hardly get close enough for a picture. The crowing roosters did not help my putting game.

As for golf, Puakea is not nearly the course as The Ocean Course  at Hokuala I had played before. A public course, the front nine resembled a subdivision course winding through a neighborhood, but it was lush. The climate here is such that if you take a divot with an eight iron, by the time you have walked back to the cart, the grass has grown back over it.

The back nine was splendid – dinosaur country, at the base of majestic mountains.

I played decent, considering I was using somebody else’s clubs and teed off at what would be midnight on Eastern Standard time. I shot a 92, about my speed, but I parred the last two holes.

As for a primitive round of golf at Kauai? Even a caveman can do it.

I am Jim Brewer, Editor of the new CvilleBuzz, a humble on-line attempt to entertain those, not only … END_OF_DOCUMENT_TOKEN_TO_BE_REPLACED