You are here: Home / Articles From the Past / A Hatch To Remember 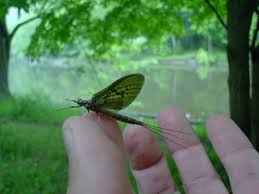 If you hit it just right, there is a hatch of Green Drakes on the Shavers Fork in West Virginia so prolific that nothing else compares.

I hit it once while fishing with my good buddy Dave Gladwell. Every trout in the river was feeding in the surface. Squadron after squadron of big, fat mayflies attacked the water. While spinners were crumbling in mid-air and falling on the water, duns were popping up in the surface. Fish were feeding so heavily, the slurping sounds were like a thousand pigs feeding at the trough.

The trout – big golden, rainbows and browns – were oblivious to anything but the insects. Fish were rising within a rod’s length of my waders. The most difficult part was deciding on which fish to cast. Strikes were steady, a couple each minute. We fished until the light of day had completely expired. Even in the dim moonlight, fish continued to rise.

Believe me, it was and is. If you ever get the chance, fish this hatch on the Shavers Fork and you’ll see what I mean.

The Green Drake hatch on the Shavers Fork happens around Memorial Day, depending on the weather and water conditions, and continues into June. The Green Drake, Ephemera Guttulata, is the largest mayfly in the east. To match the dun, try a size 10 Cranberry Killer, an overstated Light Cahill with grizzly tip wings designed by Charlie Hartwell.

The Green Drake spinner, often called a Coffin Fly, is duplicated with a white quill bodied fly on a number 10 hook with mallard wings, light brown hackle and three long black rabbit whiskers for a tail.

The Shavers Fork of the Cheat River originates near Spruce in Pocahontas County and flows north through Randolph County to eventually form the Cheat River. Trout are stocked from Cheat Bridge on Rt. 250 west of Durbin to the Stuart’s Recreation Area east of Elkins, a distance of 42 miles. The stream receives some 50,000 pounds of trout annually.

A six-mile Catch and Release area draws much of the attention from fly-fishing pilgrims. The Bowden-Stuart area is accessible by Forest Service Rt. 93 north of Rt. 250, about a three-hour drive from Charlottesville.

Out of state licenses are available at numerous locations, including Durbin and Bartow, small towns located on Rt. 250, just across the West Virginia border.

There is primitive camping available along the river with several motels in the Bowden area. Should fate grant you a few spare days in late May or early June, give the Shavers Fork a try. You may just hit it right.

A Hatch To Remember

I am Jim Brewer, Editor of the new CvilleBuzz, a humble on-line attempt to entertain those, not only … END_OF_DOCUMENT_TOKEN_TO_BE_REPLACED